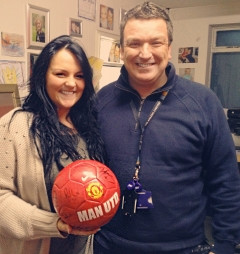 On Friday 10th May United Junk Ltd attending a charity night in aid of The Alex Hulme Foundation, we donated 1 week’s hire of a maxi skip & a crate of fosters… We also bid in the auction to win a signed Manchester United football… even signed by Fergie himself  We won the ball @ £400 all proceeds to The Alex Hulme Foundation, on that night alone over £3000 was raised towards Alex’s legacy! What a fantastic result.. The Alex Hulme Foundation was formed as a legacy to Alex in recognition of the courage & bravery he showed during his illness. Alex was 12 when he died September 2011 to Non Hodgkin Lymphoma. Alex’s parents and younger brother set up the foundation to raise awareness for this rare disease, the main purpose for the foundation is to aid research into Childrens Non Hodgkin Lymphoma. The Alex Hulme Foundation aim to make a difference & through raised awareness and donated funds that will allow researchers to build on their knowledge into the disease, which will in turn provide clinicians with the ability to offer a more flexible treatment plan to children diagnosed in the future. What a fantastic family. United Junk plan to support The Alex Hulme Foundation in all future events and raise awareness.